The firewalk on Saturday 20th August 2022 will take place at the Nicholson Way as well as the main firewalk the event offers kids entertainment with a BBQ and bar. Around 25 members of the Russell Roof Tiles team have already volunteered to take part in the firewalk and brave the hot coals in aid of raising at least £100 per person.

The company have launched ‘Give 4 Good’. A project in celebration of 10 years of Russell Roof Tiles’ independence, which will donate money to good causes in the local area.

Andy has wanted to put on the event for some time, but it was delayed because of Covid-19. After months of planning and organising, the event is set to take place in just a couple of weeks and raise money for charity.

Andy Iliff, Assistant Works Manager, who is leading on the fundraising event comments: “Setting up the firewalk event has been a long time coming. It will be lovely to see staff and their friends and family come along to what should be a great fundraiser event for some outstanding local charities that we’re honoured to help and donate to.”

Russell Roof Tiles has a series of events to raise its £50,000 target including a Big Quiz, Golf Day, Bake-Off, Paddle Challenge and Football Match. Recipients of the fundraising initiative include local causes such as Hillfield Animal Home, YMCA, Burton & District Mind – all of which have been nominated by the staff.

With international street food, a children’s tractor and bouncy castle, and music, a disco, and a raffle, Russell Roof Tiles have set up an event that is sure to have something on for everyone.

As part of the Give 4 Good programme the company has two match funding opportunities for team members who want to organise or take part in events, to raise money for own charity or good causes.  If they are able to raise £1000 for their own event RRT will donate £1000.

Andrew Hayward, Managing Director at Russell Roof Tiles said: “Our staff always get involved in lots of different events and are great sports. We have already held eight company led activities, as well as a team match-funding programme. I am very proud to have such a hard-working and charitable team and am very much looking forward to the firewalk event.” 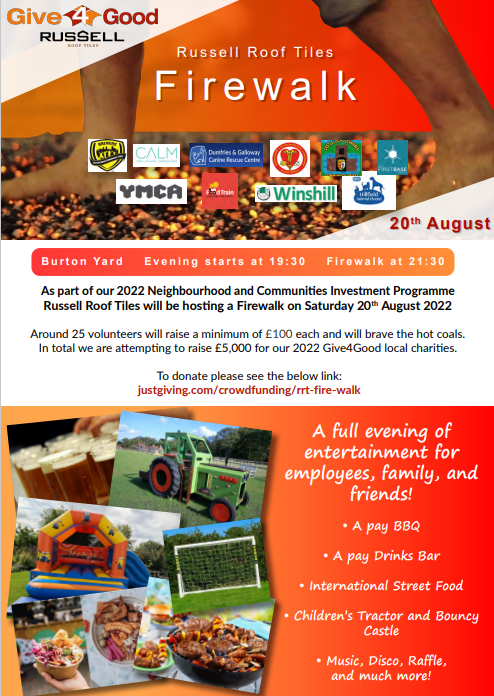