Russell Roof Tiles, returned to the Pirelli Stadium in Burton to host its annual Charity Quiz, raising over £12,000 for local charities and community causes.

A total of 53 teams of four, which included customers, friends, family, staff and suppliers from across the UK, joined the leading roof tile manufacturer for an evening of competitive quizzing, a nail-biting auction and an exciting raffle at Burton Albion’s Pirelli Stadium.

It was the Derbyshire County Cricket Club team lead by chairman, Ian Morgan OBE, that took home the infamous champions trophy after leading with an impressive 55.5 points. Followed closely by, Burton Albion’s Chairman, Ben Robinson MBE who led his team, the Cherokee’s, to near victory with 53 points.

Contributing to the £12,000 total, generous guests also bid thousands of pounds on items including a five-star holiday to Spain, corporate hospitality tickets for Wimbledon, a Michelin star experience at the Oyster Club and a voucher for a London theatre show that included a champagne afternoon tea. One lucky winner also took home two concert tickets to Elton John’s farewell tour and tickets for the 2023 England vs Australia Ashes.

The raffle was also immensely popular again this year, adding £2,100 to the pot, with prizes including beauty hampers, cinema tickets, tickets to the Aston Villa vs Liverpool football match, paddle boarding lessons plus shopping vouchers and champagne.

Andrew said: “This was our biggest and best quiz so far; we had just over 200 people attend and so we want to say a massive thank you. It was once again an incredible night that helped us raise a huge amount of money that will help us support charities within our communities and make a real difference to people’s lives.

“I would like to thank everyone that attended and helped us raise our biggest amount yet as well as Burton Albion Football Club, who provided us with the Pirelli Suite to host the event.”

The popular event hosted by Russell Roof Tiles, which employs 150 people at its two sites in Burton and a further site in Lochmaben, was back after a three-year stint due to Covid, but has once again ignited the company’s spark of raising money for good causes.

Russell Roof Tiles announced its ambitious target to raise £50,000 for good causes this year, with a project called Give 4 Good. 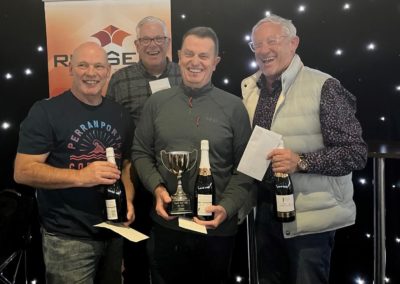 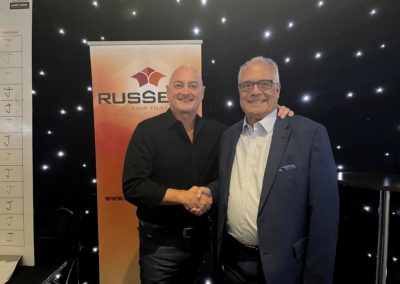