Home » News » On your bike! Fundraising goes through roof 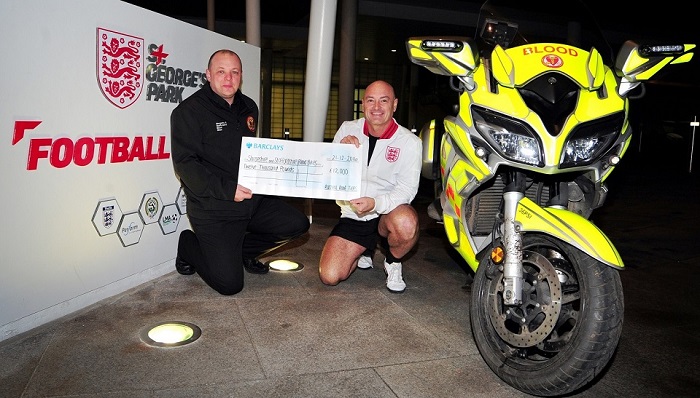 Over the past 12 months RusseIls’ fundraising activities have included a sponsored weight loss, two peaks challenge (Ben Nevis and Scafell Pike), family fun day, as well as numerous football matches, a charity golf day and a version of “superstars”.  Most of the company’s 105 staff at its two sites, on Wetmore Lane and Nicolson Way participated in the fundraising activities in some form or other.

Shropshire & Staffordshire Blood Bikes (SSBB) is a volunteer-led charity providing an urgent delivery service, transporting lifesaving medical supplies to NHS Foundations across the region. SSBB is believed to cover the largest geographical area of any Blood Bikes group in the UK.

SSBB runs 12 bikes, and has 200 volunteers, comprising of riders, fundraisers and controllers – who take urgent calls from the hospitals, and track the bikes until they have completed their lifesaving delivery. The charity operates 24/7 on a totally voluntarily basis and does not receive any government or local authority finance.

For 2016 Russell Roof Tiles not only chose SSBB as its officially charity for the year, but also sister charity Dumfries & Galloway Blood Bikes – based close by Russell’s Scottish factory, near Lockerbie.  In total the company raised £12,000 for each of the blood bikes charities. In 2015, the award-winning firm raised £16,000 for charities.

Helen Bundy, Chair of Shropshire and Staffordshire Blood Bikes said “When I met up with Andrew Hayward from Russell Roof Tiles all those months ago, and he expressed an interest in Russells supporting our Charity I had no idea that he and the company would later be presenting us with a cheque for £12,000. What a Christmas present and just before our third birthday!

“A brand new NABB (Nationwide Association of Blood Bikes) approved motorcycle will enable us to provide an even better service to local hospitals as reliability is a major factor for us. Being able to buy a brand-new motorcycle is quite a coup for any blood bike charity.”

Andrew Hayward, Managing Director at Russell Roof Tiles comments, “At the start of 2016 our aim was to raise enough money for them to be able to buy an additional second-hand bike.  We are delighted to have raised enough for a new bike which will help Helen and her team in their essential work in the local community in saving lives.

“Having worked with SSBB over the last year we have learnt much more about the essential service they provide across our region and it is shocking that such a crucial service is only possible due to the commitment of Helen and her team of volunteers.”

The new bike will allow SSBB to improve their services for the health and well-being of the people of East Staffordshire with deliveries of urgent blood and platelets to Queens Hospital, Burton and Samuel Johnson Hospital, Lichfield.  It will support local patients with their deliveries of specialist tests from Burton to centres such as the Queen Elizabeth, Birmingham and as far afield as Sheffield and Liverpool.