Staff from across Russell Roof Tiles Burton and Lochmaben (Scotland) sites gathered at the stadium, on 27 May, to go head-to-head with its customers and suppliers in a bid to raise money for its ambitious Give 4 Good programme.

The pitched roof tile manufacturer, that employs 140 staff across its three sites, launched its ‘Give 4 Good’ programme this year to raise £50,000 for local charities and organisations.

Both squads arrived in the players car park before entering through the players entrance and into the Home and Away dressing rooms at the stadium for their pre-match team talk before going onto the pitch for a warm-up by one of AVFC’s professional coaches before returning to the players tunnel to line up in preparation to be led out by the FA Qualified referee and linesmen.

The first half started at a frantic pace as the Aston Villa Allstars, wearing the famous Claret and Blue, took the lead after just 5 minutes with Adam Tippins, Commercial Director at Bloor Homes East Midlands, getting the opening goal in front of the famous Holte End.

There was some great build-up play between RRT Managing Director, Andrew Hayward and Davidsons Homes Group Procurement Director Chris Wood who then allowed Tippins to hit a great strike from 20 yards which sailed over the Rangers Keeper, John Dervey’s head and into the net to open the scoring.

Things would only get better for the Allstars as they doubled their lead on the 15-minute mark as RRT Area Sales Manager and Allstars Captain on the day, Ross Hayward, made it 2-0.

Andrew Hayward was again involved as his lofted pass was sent over the top of the Rangers defence allowing Hayward Jnr to race in on goal and calmly slot past the despairing keeper. The Russell Roof Tiles Rangers battled their way back into the game and made it to half time without conceding again.

With the match finely poised at 2-0, and with only 2 minutes on the clock in the second half, the deficit was halved to 2-1. Avonside Group Contracts Manager Luke Firth scored a spectacular volley from 25 yards which sailed into the top corner to drag Rangers back into the game. The Allstars were starting to feel a little bit of nerves as Rangers pushed and pressure was building on the home side. However, a speedy counterattack ensued for the Allstars just past the hour mark and it allowed Wood again time and space to pick out a killer slide pass to Hayward Jnr who scored to grab his 2nd of the game and Allstars 3rd despite a great effort from Dervey to keep it out.

At 3-1 up, the Allstars looked to try and sit in and defend their lead to get the victory, but Rangers continued to pile the pressure on and they made that pressure count with 5 minutes remaining as Rangers Captain and Avonside Chairman, Tony Burke, played in Tarmac’s Jack Walters who coolly finished into the bottom corner to make it 3-2.

The Aston Villa Allstars were hanging on at the end and thought they had just about done enough until a moment of pure magic arrived. In the dying seconds of stoppage time, with the whistle poised at the referee’s lips, Avonside’s Chief Information Officer Kyle Burke picked the ball up just past the halfway line and drove towards the Allstars goal. As the defence backed off, Burke Jnr hit a screaming effort with his trusty left foot from all of 25 yards which soared into the top corner to tie the match at 3-3 and send the game to a penalty shoot-out to see who would lift the Russell Roof Tiles Charity Football Final Trophy.

After leading for the vast majority of the game, it was the Aston Villa Allstars who held their nerve and won the shoot-out 4-3. All 4 of their penalties were scored by Hayward Jnr, Wood, James Pendleton and Danny Mulholland as Rangers unfortunately missed 2 of their 5.

The match, set up by Ross Hayward, Area Sales Manager at Russell Roof Tiles added: “We would again like to thank everyone who supported and donated to some truly worthy causes, and we would also like to thank Aston Villa Football Club and their staff, especially Frankie Harrison, for their extremely exceptional service throughout the whole day. Whilst all the players thoroughly enjoyed the experience, the main success of the day was raising an astounding £4,000 for our ‘Give4Good’ Programme.”

The company has invested heavily in charity support over the years since 2015. Russell Roof Tiles has supported 33 different charities and causes local to Burton and Lochmaben, it has hosted 39 fundraising events and has donated £113,500 and counting to various organisations. 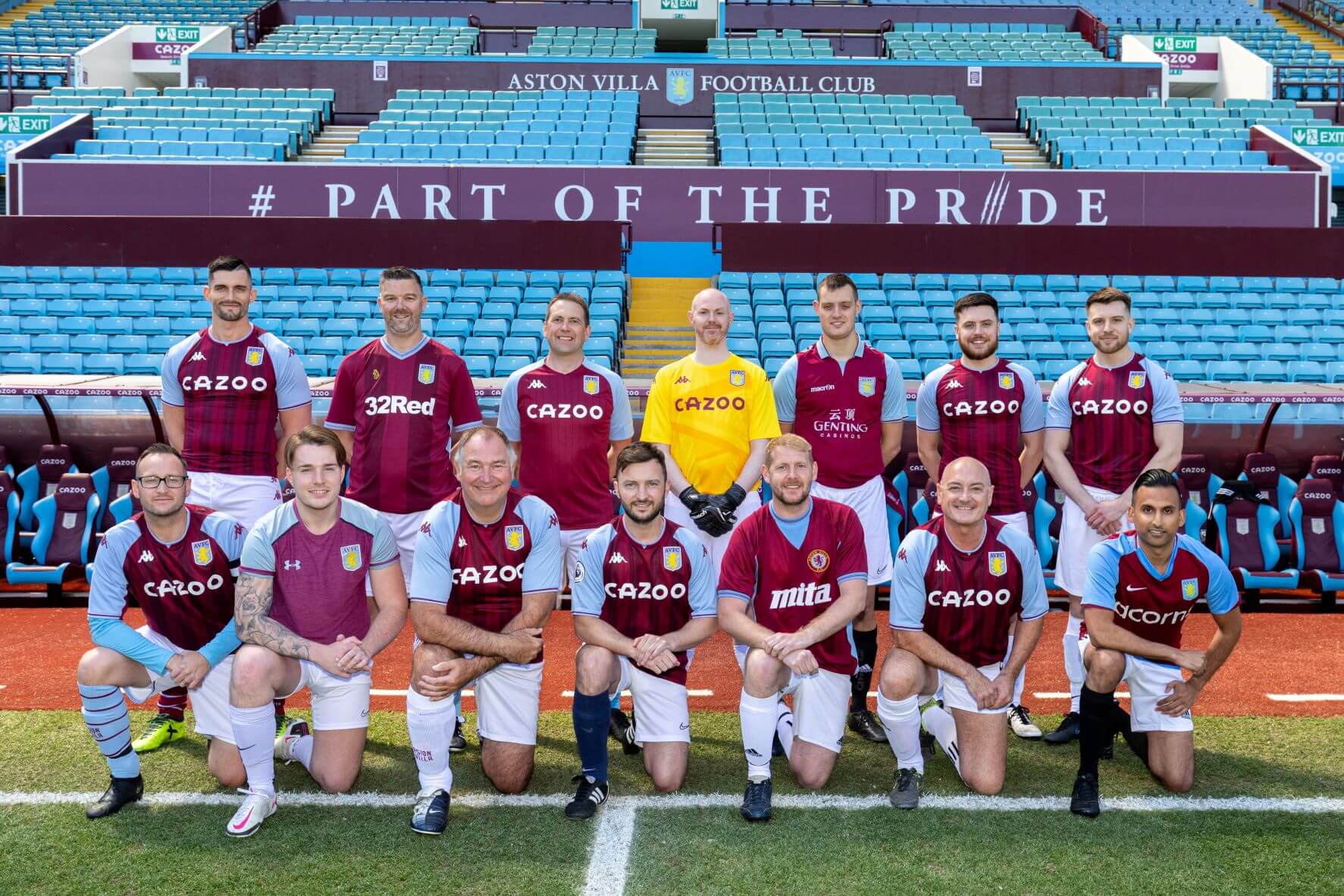 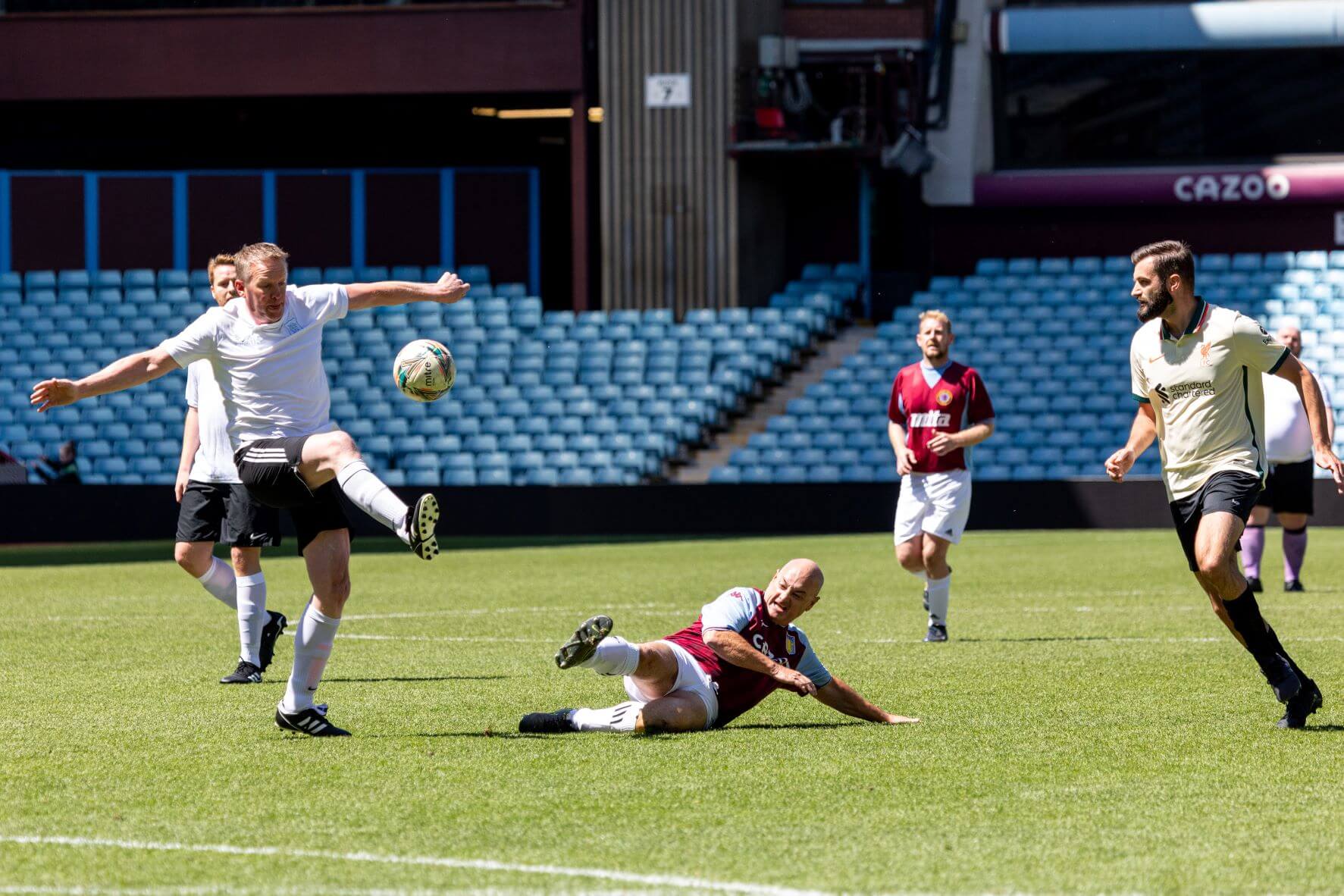 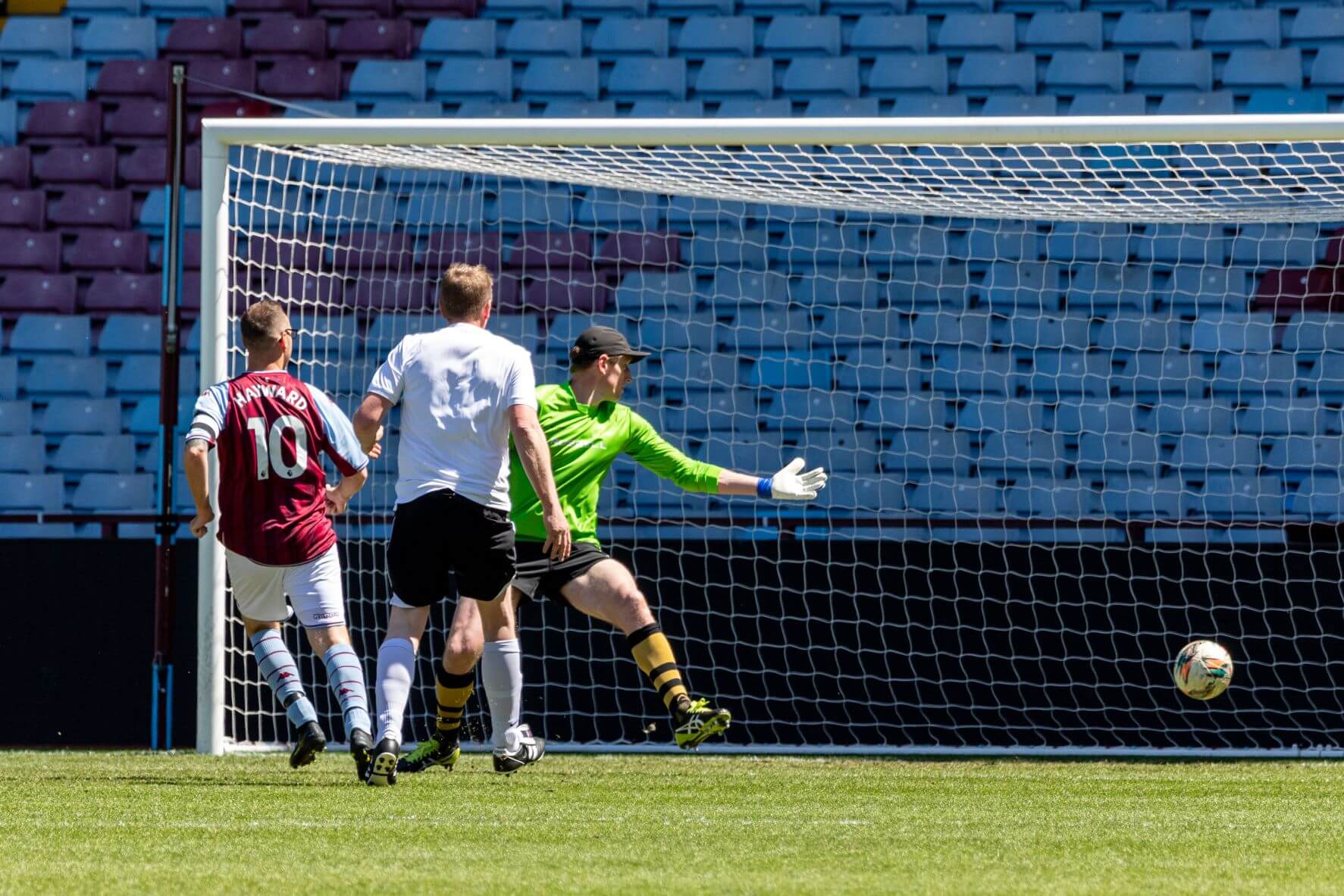 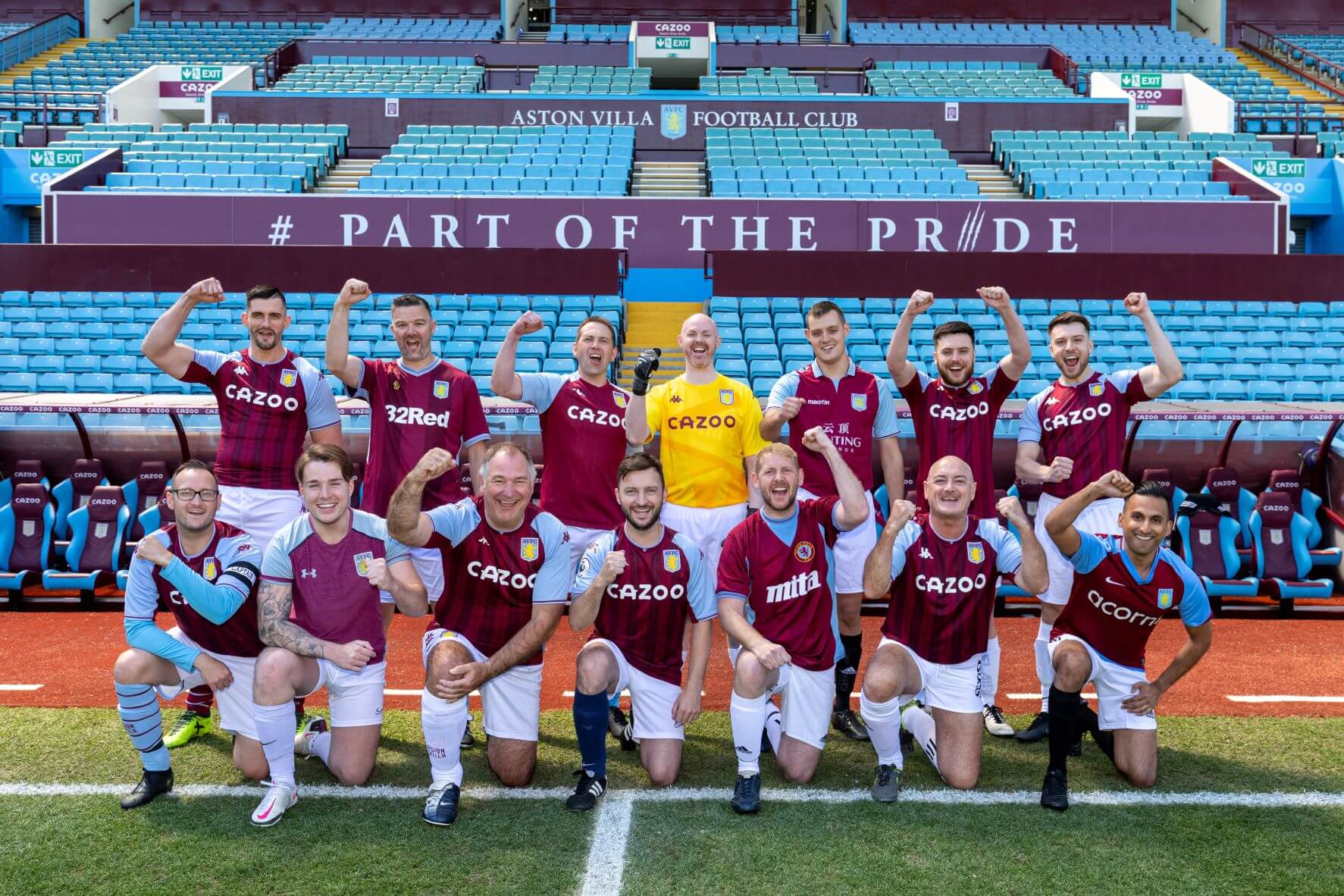 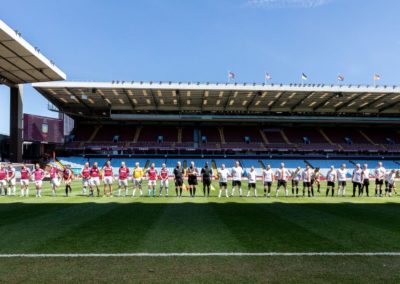 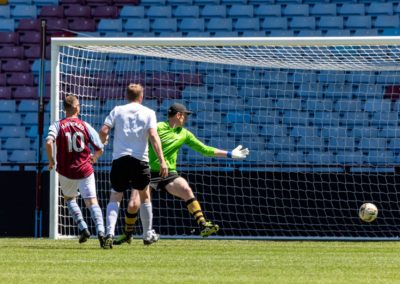 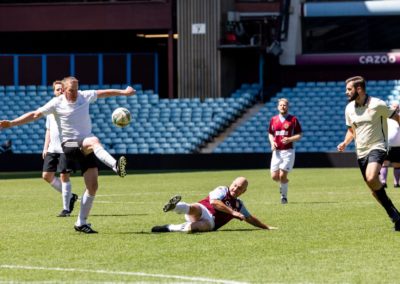 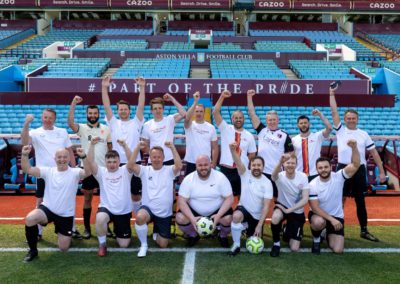 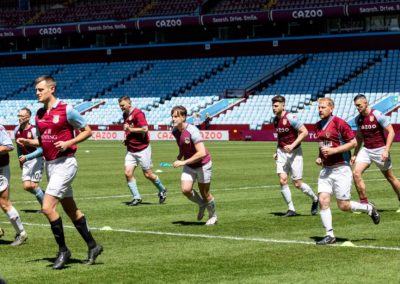 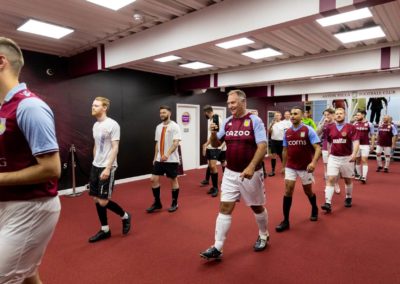